The history of fly screens.

Fly screens, insect screen or bug screen are designed as the first line of defence against germ carrying insects entering our homes.  So who was the bright spark that came up with the idea of using a textile with a weave small enough that would stop small insects such as flies and mosquitoes, yet open enough allow ventilation?

The furthest we could go is back to the best match for conventional fly screens was back in 1832, when the term “Woven wire for window screens” was referenced in the publication, American Farmer. In 1836 an ad appeared for “wire window screens” in the American directory, Boyd’s Blue Book. 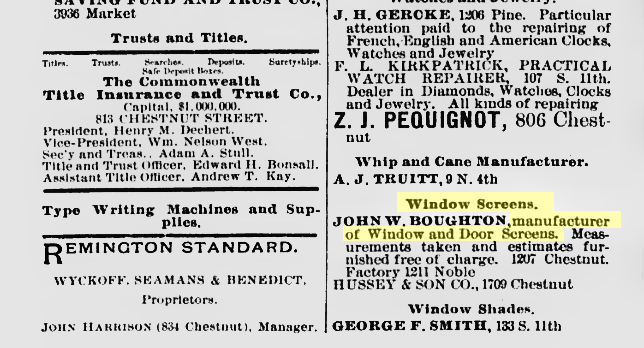 Boyd’s Blue Book: the first commercial mention of window screens back in 1836.

In 1939, two wire window screens were exhibited at Quincy Hall in Boston in 1839, a bustling market located on the harbour.

In 1861 Gilbert, Bennett and Company was manufacturing wire mesh sieves for food processing. An employee realised that the wire cloth could be painted grey and sold as window screens.  The product became an instant success. Due to this success, Gilbert & Bennet’s contribution to the development and economy of Redding, Connecticut was immense. The town has a Cultural Centre in their name (with its own Facebook page).

In 1868, a U.S. Patent was filed by Bayley and McCluskey for a screened roof-top rail-car windows, allowing ventilation, while preventing “sparks, cinders, dust, etc.” from entering the passenger compartment.

By 1874, E.T. Barnum Company of Detroit, Michigan advertised screens that were sold by the square foot.  Apparently at the time, window screens designed specifically to prevent insect entry were not patented in the United States. By 1900 several patents were awarded for particular innovations related to window screen design.

So where are we today? 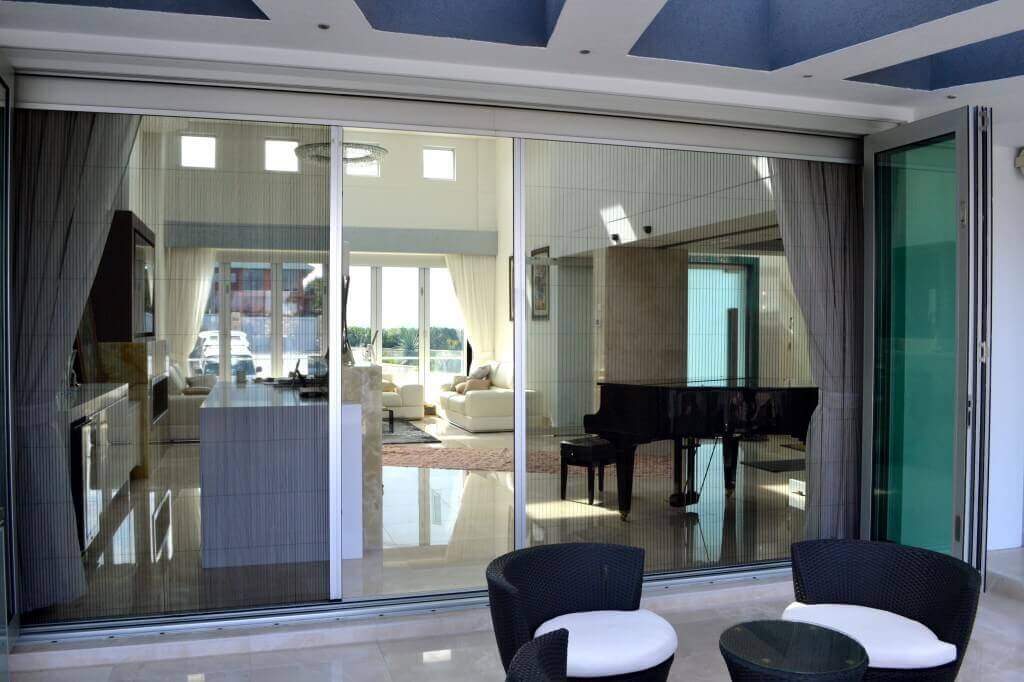 Pleated Insect screen on the threshold of a bifold door.

Most houses in Australia, the Europe, the United States and Canada have screens on operable windows and doors.  We have choices of mesh composition so we can choose what type of material will best suit our application, for example fibreglass mesh is used for protection against insects alone, however metal and bronze screens can be used to protect against insects as well as debris, embers or even small animals.

In addition, in 2015 we have a broad choice of screening solutions to meet all types of windows and doors.  These include fixed screen, retractable, pleated and sliding screens.  They are available in almost any colour and are designed to not only look good but most importantly protect the house from the nuisance of insects.

Artilux Australia is proud of taking innovative ideas to the Fly Screen industry. Our designs are meticulously made to blend with existing frames respecting the design and architecture of modern houses. We believe the best fly screens are those you  ”almost can’t see” or if visible, they actually “look beautiful”.

If you would like a Free On-Site Consultation with one of our screening specialists please click here.

Welcome to my blog which focuses on tips and handy information for making your home life and surrounds more enjoyable and headache free. Basically I want to cover all the questions that I have about what will make my home more comfortable, energy efficient, comply with any new safety regulations and of course – won’t break the bank. I have so many of questions I want answers to relating to home maintenance. Some of these relate to the best product to use in my home from security systems to sound systems as well as services. How much should I pay for a gardener or a cleaner? So join me as I go through the minefield that is home maintenance! If you have any specific questions let me know and I will go out there look it up.

Get your FREE onsite consultation
and speak with the experts at Artilux.

Enter your postcode in the short form below and you'll get transferred to our online booking system.